Forgive me as I am very new to vault and have only to this point built a failover cluster Vault environment with a consul backend (yes I know this is now no longer required) deployed using terraform and ansible on a vsphere environment using CI/CD.

Now I am at the point of learning how to actually use Vault. However, I am a bit confused about vault paths and wondering if someone could clarify how wildcards work in policies and PUT operations?

I set up a test on my vault environment:

I then created a role:

and then set a token to use that role:

Then I tried to create a secret in kv using that path:

It was my belief that “ops/data/vault-test/secret/” would be acceptable since there is a wildcard in the policy and the path would be created.

Even odder, this works hence my confusion:

Can someone please explain is this a bug or a misunderstanding? How is a wildcard supposed to work? Or should I be using a /+/ there instead?

Also, what are the best practices around setting paths? My intuition tells me that I should set something like:
/<project or department>/<application>/<environment>/<what-it-is (secret etc)>/

Or should you put what it is at the beginning i.e beginning with /kv/?

This command is the start of the problems.

Apparently - and it’s a surprise to me that this is allowed, and probably should be considered a bug - you’ve managed to create a literal path in Vault that contains an asterisk character. This will cause all kinds of confusion as you try to write policies that relate to it. You should not use an asterisk in naming the path to a secrets engine.

Oh wow that really was an obvious error I didn’t realise I had even done. Of course, it makes sense, that path is the mount point and the root for that secrets engine. Very embarassing lol.

It did work once I disabled it and enabled it without the wildcard in there.

One more question, once I created a secret it is accessed using:

Am I correct if I want to filter this to only get test_secret I use -field=test_secret? That did give me the result, but is it the best way.

I really need to get my head around the best way to name things.

Am I correct if I want to filter this to only get test_secret I use -field=test_secret? That did give me the result, but is it the best way.

That is the way that’s provided, for if you’re working with Vault via shell scripts. It makes sense to use it in that context. In other programming environments you’d be more likely to talk to the Vault API directly.

I really need to get my head around the best way to name things.

For the most part, just whatever works for you.

The only thing to bear in mind is that Vault ACL policies have limited support for wildcards:

So, if you can reasonably predict that you need to write wildcard policies covering multiple secrets engines, it is useful to bear that in mind when structuring their names.

I wrote up a guide to Vault ACL policies based on my experience with Vault and some common questions in the forums here: 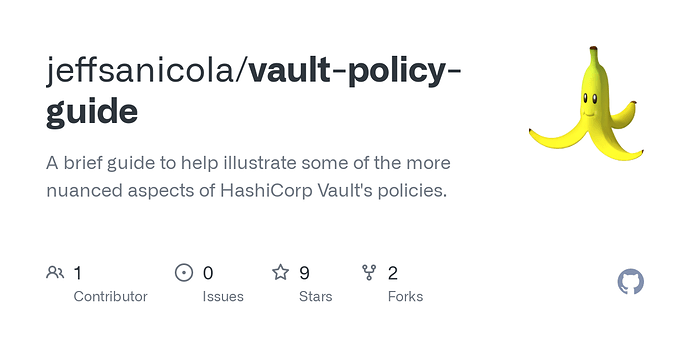 It’s by no means perfect, but might help you get through some of the topics you’ll encounter.