There’s a terraform package for Termux (using a Galaxy Tab 7+). And most (all?) providers should work for the “linux_arm64” platform on this device. I’ve used:
terraform providers lock -platform=linux_arm64
to create locks for it. However, when I try a terraform init with that, I still get:
Provider Terraform Registry v4.31.0 does not have a package available for your current platform, android_arm64

Looks like the forum replaces uri looking things with the title of the url. Trying again for the correct error message:
Provider registry.terraform.io/hashicorp/aws v4.31.0 does not have a package available for your current platform, android_arm64

While android is based on the Linux kernel, the compilation target is different for their respective binaries. I’m not sure how the Terraform package you are using is compiled, but the android_arm64 runtime would need to be specified by default, and that is why it’s searching for android in the registry.

Unfortunately the terraform trace output doesn’t include the GOOS_GOARCH info, since that is usually obvious from the running host. Can you confirm that you can actually run a linux_arm64 Terraform binary?

From some occasional previous chatter about this, I remember that Termux is a Debian-derived Linux distribution that is built using Android-oriented compiler toolchains.

I see that Termux has Go toolchain packages: Index of /apt/termux-main/pool/main/g/golang/

…and so I assume that the Terraform packages are in turn built from those Go toolchains: Index of /apt/termux-main/pool/main/t/terraform/

Since Android is not one of our supported platforms I don’t have any experience with what, if anything, is different in the Android port of Go as compared to the Linux port. I suppose it is possible in principle that the Linux builds could work, but in the Go repository I see a lot of special cases for Android in the startup code, in the OS API code, and in how exactly the Go tool runs the compiler. Given that, it may not be possible to run linux_arm64 executables on android_arm64.

Official support for different platforms is decided by the individual provider developers because they are the ones that create and sign their official distribution packages. You may be able to convince some developers to support android_arm64, but I expect not enough of them for Terraform to be generally useful in Termux.

I think there are some alternative paths that might be more profitable:

I’m trying to figure out how to manually install providers now (a local fs cache looks simple enough but that’s unlikely to get me around my platform issue). I’ve looked into the fedora and debian proot’s and they seem to want the same binary, so… This is the file information from my terraform binary and it looks like the one hashicorp officially compiles (maybe not - I don’t have another arm64 platform to look at, but it looks like it):
data/data/com.termux/files/usr/bin/terraform: ELF 64-bit LSB shared object, ARM aarch64, version 1 (SYSV), dynamically linked, interpreter /system/bin/linker64, Go BuildID=ocZgbrHcOvobI1MwXEfe/oDtyOITye6ByoLgA9VWF/cXIh1zeb6gI8kX_Ov1gP/g0Dpd3ysg7pjQjybsZoA, stripped

This is why I just wanted a way to specify my architecture - it should just work. I’m going to continue down the path of trying to manually install the provider and ensure that works as an actual test though.

Without executing the binary, I’m not sure offhand how to differentiate android from vanilla linux, since they are both going to be the same binary format just with some differences in runtime. I do know however that is not an official Hashicorp binary release, since it’s dynamically linked. The goal with asking if you could run a normal linux binary above was to allow you to also run the linux provider binaries. There are not going to be android builds of most of the providers, so on top of manually installing them, you would also have to compile them all yourself.

It would appear you have a point and the binary I installed does have specific calls the hashicorp binary doesn’t: 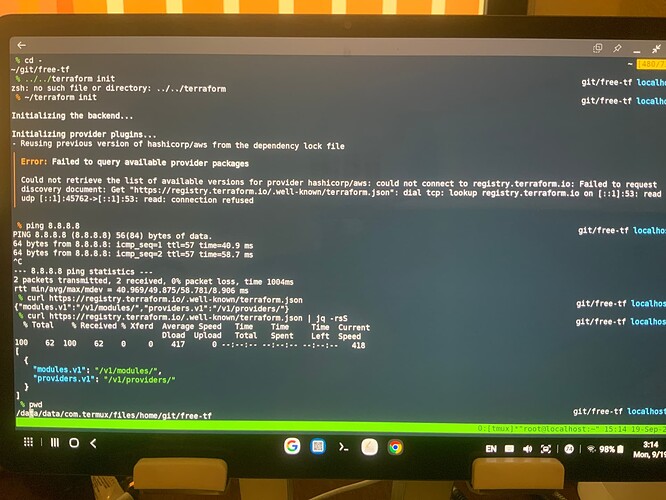 Ah, interesting! I suppose on Android there must be a different mechanism for making network requests to allow Android to implement its application sandbox and permissions system, and so presumably one effect of building a Go application for Android is using a different implementation of the net package which does whatever is required to successfully access the network from an Android application.

Of course the main purpose of most Terraform providers is to access an API over the network, so this seems like a show-stopper: Terraform providers built for plain Linux will presumably encounter a similar problem as soon as they make an API request.

I think that means your only option is to build the providers inside your Termux environment yourself using the Termux Go toolchain, or to convince Termux upstream to include them in the distribution as I was describing. Your custom builds will then hopefully be able to interact with the Android network stack.

Yeah. Thank y’all for the help. I thought termux was using the official arm64 package out of the box. It’s not and I’m not trying to deploy android tablets to admin with right now, so a terraform + provider build pipeline for this isn’t something I’m going to pursue. Thanks for the help.